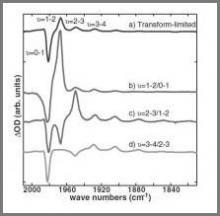 Manipulating vibrational motions might allow the laser control of chemical reactions or be used to improve 2D IR spectroscopy. It is well-known that simple chirped pulses can lead to high vibrational excitation. We demonstrated that sophisticated mid-IR pulses can manipulate the populations of individual vibrational levels. Shown in the figure to the left is the pump-probe spectrum measured for a transform-limited pump pulse (55 fs duration).The spectrum consists of a negative feature at 1983 cm-1followed by a series of positive and progressively weaker peaks at lower frequencies. This spectrum is typical of femtosecond pump-probe studies. The negative feature corresponds to a bleach of the ground state and ν=1–0 stimulated emission. The positive peaks are sequence bands arising from ν=1–2, 2–3, 3– 4, etc., absorptions. The diminishing peak intensities indicate that a transform-limited pulse becomes increasingly less efficient at populating progressively higher vibrational levels.

In contrast, when we use an evolutionary algorithm to build pulses which optimize the population of specific peaks, we see very different pump-probe spectra. Optimizing the v=2-3 transition, for example, leads to strong enhancement of this transition relative to that in the conventional pump/probe spectrum, and we see a negative peak, indicative of stimulated emission, for the v=1-2 transition. Phase optimizations improved the ratio of the targeted peaks by 2.2–5.8 times the transform limited pulse.