Human islet amyloid polypeptide (hIAPP) self-assembles into amyloid fibrils, a process which has been implicated in the onset of type-II diabetes. Evidence suggests that prefibril intermediates, rather than the fibrils themselves, are actually the cytotoxic species responsible for type II diabetes; as a result, there is much interest in understanding the aggregation pathway and identifying intermediate structures. 2D IR spectroscopy, when combined with residue-specific isotope labeling, can give both the structural and temporal resolution necessary to study the intermediate structures and capture folding kinetics. Isotope labeling allows us to resolve individual residues from the peptide chain and track the changes in secondary structure at the labeled positions during fibril formation. Our recent development of rapid-scan 2D IR allows us to acquire a 2D IR spectrum in less than a second. Thus, we can follow the kinetics of amyloid fiber formation in real time. 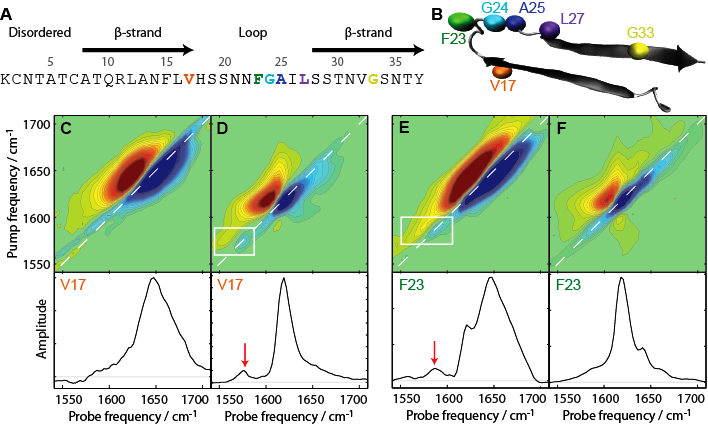 We strategically 13C=18O isotope labeled single amino acids, as shown in A and B of the figure at the right, which allowed us to follow the aggregation of hIAPP with residue specificity. In previous work, we have shown that residues that reside on either the N- or C-terminal β-sheets in the final fiber (such as V17 and G33, respectively) have a weak and broad isotopic signature around 1595 cm-1 at early times, indicating that the label, like the peptide, is in a random coil conformation. When the fibrils have fully formed, as evidenced by the sharp 1620 cm-1 peak, these residues exhibit a coupled isotope-labeled peak around 1578 cm-1, indicative of its incorporation into a parallel β-sheet.

Unlike the residues on the β-sheet; however, residues in the turn region, like F23, exhibit a coupled isotope label peak at 1587 cm-1 at early times, indicating the formation of a parallel β-sheet during the lab phase. At later times, we no longer saw the parallel β-sheetsignature for F23, signifying a local structural change to a more disordered structure in the final fiber. This result points to the presence of an on-pathway intermediate of hIAPP with parallel β-sheet structure in what is ultimately the turn region in the final fiber.