Cataracts are a common protein misfolding disease of the ocular lens, which affects approximately 50% of the population over the age of 65. This disease results from accumulated damage to lens Crystallin proteins, which destabilizes their folds and causes them to aggregrate, resulting in the blurring of vision. Currently, the only treatment for cataracts is invasive surgical extraction that is carried out in the advanced stages of the disease. As a result, there is much interest in understanding the cause of cataracts and the mechanism by which they form.

In order to understand the structures of lens Crystallin aggregates and their mechanisms of formation, we have studied γD-crystallin under a variety of conditions, including radiation, heat, and a pH change with acid exposure. The morphologies of the amyloid fibers that form upon denaturation are dramatically different. When denatured with radiation, γD-crystallin forms globular structures with fibers extending off due to the drying process. When treated with heat, γD-crystallin forms amyloid like β-sheets that sometimes twist and fold. When incubated with acid, it forms thin, curly fiber structures.

The 2D IR spectra reveal more structural information into the formation of these amyloid fibers. We can see that the C-terminal domain forms amyloid β-sheets, whereas the N-terminal domain unfolds into disordered structures. By using a combination of 2D IR, mass spectrometry, SDS-PAGE gel, and THT fluorescence, we can study the detailed structure of aggregates like in γD-crystallin, as well as many other proteins that have implications in diseases like diabetes and Alzheimer’s. 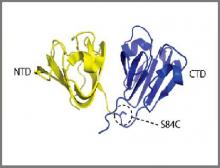 More recently, we have moved on from in vitro studies of γD-crystallin and now use our 2D IR spectroscopy to measure lens tissue from both animals and humans. The molecular structures of aggregates in lens tissue is not well understood. Using 2D IR spectroscopy, we measured spectroscopic signatures of amyloid β-sheets in cataract lens tissue. By measuring healthy lenses that are exposed to different enviornment stress, such as UV light, as well as measuring diseased lenses, the molecular difference between noncataracts and cataracts lenses can be observed. When comparing the healthy lens and the diseased lens, there is a clear difference in the propensity of amyloid β-sheets based on the frequency of the fundamental 2D IR peak of each sample.