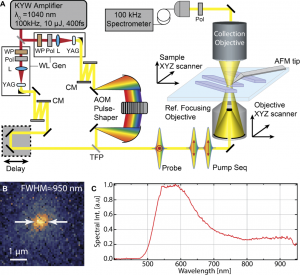 Two-dimensional white-light spectroscopy (2D-WL spectroscopy) is a powerful tool we have developed to unravel electronic couplings and energy or charge transfer in systems of interest for solar energy. It is analogous to 2D IR spectroscopy, except that excitated states are probed instead of ground vibrational states. Cross-peaks can also be observed, indicative of energy transfer. By using a white light continuum for both pump and probe, we map the correlations between electronic states that span almost the entire solar spectrum. Although the white light continuum has a low fluence, electronic transitions have large absorption cross sections, allowing us to measure the nonlinear signal.

Using 2D white light spectroscopy and microscopy (developed in our lab!), we explore singlet fission in organic thin films, most recently TIPS-pentacene. By combining the tools of nonlinear spectroscopy and microscopy, we are able to determine spatial locations and energetics of defects, which play an important role in the efficiency of singlet fission. We have previously conducted measurements on carbon nanotubes and devices, and we are now making measurements on lead-halide perovskites and devices. Each new question prompts the innovation of new methods.